⚡FLASH SALE - Buy 1 video get 40% OFF: COUPON40 - 2 videos get 43% OFF: COUPON43 - 3 or more videos get 45% OFF - COUPON45
Learn The Devastating Moves And Principles You Aren’t Shown In Class That Will Make All The Difference Between Humiliation And Being A Hero 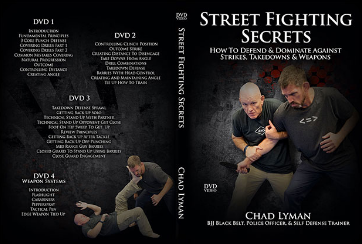 Here's the scene... You are out at a bar with your friends watching sports and a group of 3 “local tough guys” comes over and they are clearly looking to start trouble.

These guys are bad news. You know the type: big, drunk, obnoxious and loud. One of them asks your friend (who is a nice guy but not a fighter) – what the F*&k he is looking at?

When your buddy tries to diffuse the situation, they become even more hostile and “the leader” pours a drink on him.

Now, since you’re the guy who takes BJJ lessons and goes to class your friends are suddenly looking to you to stand up to these yahoos to save face.

But… the reality is, you haven’t been training to fight. Yes, you train to win BJJ competitions, or train to win your rolls (grappling) in class; but you don’t train to actually fight.

For goodness sake, you start on the knees most of the time and slap hands first and there isn’t any striking. This situation with these unskilled (but BIG and angry) drunks is nothing like that… What the hell do you do?

At this point, you become aware of one painful truth: Competition BJJ By Itself Is Mostly Useless In the Street If all you do is pull guard in class and are never instructed in more realistic scenarios, you are very likely to be embarrassed hard by an unskilled thug in the street.

In class, you just aren’t used to taking punches or dealing with multiple attackers and weapons. If you are suddenly faced with these new and intimidating variables, you are no more likely to come out of it smiling than someone who hasn’t trained a day of BJJ in their life.

The street is a much different arena than the controlled and safe environment of the training mat. It can be a nasty place – even a deadly one - where people play for keeps.

They can stab, attack in groups, sucker punch – it can be a heinous situation. You need the right training to succeed. You need to know the secrets to adapting your ground game to the street.

Don’t Worry: Your Training Isn’t Entirely Useless Don’t get me wrong: your past training, while ineffective if not correctly adapted, can also be a tremendous leg up – if… you know the proper ways to transition those skills to real life scenarios. Noted BJJ Coach John Danaher has said that winning street fights, if you’ve been trained, is “embarrassingly easy”.

Swat Team Member, BJJ Black Belt and Instructor at Randy Couture’s Gym, Chad Lyman agrees. And when you know Chad’s transitions, it is easy to win street fights. The bar guys of the world looking for trouble from you won’t stand a chance.

The Street Isn’t Usually A “Fair” 1-On-1 Fight When there is an altercation in the street, it typically starts on the attacker’s terms. Maybe it’s a sucker punch, maybe it’s a multiple-attacker scenario – you need to be prepared for anything and everything.

Weapons provide a different and very challenging variable. Would you know what to do if attacked?

What if your attacker has a knife or a club? You need to know: it could mean the difference between life and death.

What about multiple attackers? Surprise, surprise, there is no magic bullet for that one with your bare hands but did you know there are a few makeshift weapons you can use that will shift the odds to your favor and make sure you come out ahead.

Everything Chad does revolves around angles. He likes to create them and capitalize on them. Just like competition BJJ – you want to be in a position where you can attack, and your opponent can’t attack you.

Through Chad’s dynamic training techniques, you’ll learn simple concepts to always keep you safe and to keep you in a position to attack. So Who Is Chad Lyman And Why Is He Qualified To Teach Self-Defense? 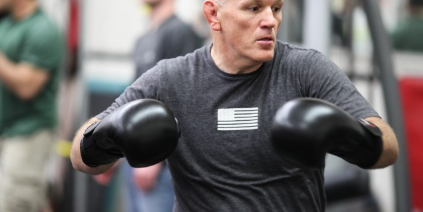